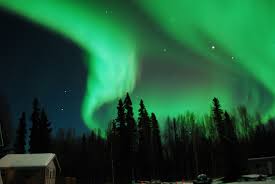 Experienced the Great Northern Lights!
One night I saw a Northern Light show and one of the formations looked like a mother with a baby in her womb… The baby was moving… It was breathtaking and actually overwhelming emotionally. (I later received a prophetic word about being pregnant and delivering a message of hope and salvation to the Alaskan people!) Wow! What more can I say… God has been speaking to me in a huge way.
Enjoy a video of the Northern Lights Click Here.
One night before I left, Samantha, the Stubblefield’s English Setter was let out around midnight and let out a howl!  Bobette called me to hurry and come!  There on the front lawn as peaceful and safe as you could imagine was a mother moose with her calf.  This was another sign (I believe) that God was watching over G3 Alaska Ministries and the place I would hopefully call home soon!