To me it makes perfect sense that we are in the end times.  How could we not be?  And even if this is not the end, shouldn’t we always be living each day as if it were our last?  This was a question raised recently by a pastor I was listening to.  Everything that can be shaken will be shaken….. This is what Jesus says!

“ASIA SHALL BE SAVED”
A newsletter for Compassion for Asia Ministries
Heaven and earth will pass away, but my words will never pass away.
Matthew 24: 35

I know that news and media do not talk a lot about Nepal now. There are still continuing earthquake
aftershocks. It is the 17th of June today and there have been 4 aftershocks, three were 4.1+ and the other one

was 5.1. (Kantipur news) It is not over. It is still affecting lives. The earthquake in Nepal that came on April 25th rated 7.8, then on the 26th of April there was a 6.7 quake, followed by one on the 12th of May rating 7.3 and over 30,000 jolts (less than 4) and over 270 aftershocks, has affected over 8 million people. This has resulted in 8786 deaths and over 23,000 injured. Landslides continue to take place in different parts of the country and last week alone, 43 died at Taplegung in East Nepal. According to the UN, 3 million people are in need of assistance.

You can follow Sudip and his wife, and learn more about their ministry…by visiting http://globeintl.org/missionaries/khadka-sudip-anne-lise-2/… from here search their recent newsletters to learn about the earthquake.

For no one can lay any foundation other than the one we already have–Jesus Christ.
I Corinthians 3:11

Jesus left the temple and was walking away when his disciples came up to him to call his attention to its buildings.

“Do you see all these things?” he asked. “Truly I tell you, not one stone here will be left on another; every one will be thrown down.”

As Jesus was sitting on the Mount of Olives, the disciples came to him privately. “Tell us,” they said, “when will this happen, and what will be the sign of your coming and of the end of the age?”

It is going to be interesting to see what the next few years bring, if the foundation that the world is building can last that long.  While we are all snug in our beds with visions of sugar plums dancing, there are over 7 billion people on the earth that are hungry and refugees continue to travel from one country to another.

Foundation – A series or magazine articles originally written in 1942… affected Newt Ginrich and sparked his 1996 book, To Renew America.

In Learned Optimism,[11] psychologist Martin Seligman identifies the Foundation series as one of the most important influences in his professional life, because of the possibility of predictive sociology based on psychological principles. He also lays claim to the first successful prediction of a major historical (sociological) event, in the 1988 US elections, and he specifically attributes this to a psychological principle.[12]

In his 1996 book To Renew America, U. S. House SpeakerNewt Gingrich wrote how he was influenced by reading the Foundation trilogy in high school.[13]

Paul Krugman, winner of the 2008 Nobel Memorial Prize in Economic Sciences, credits the Foundation series with turning his mind to economics, as the closest existing science to psychohistory.[14][15] Businessman and entrepreneur Elon Musk counts the series among the inspirations for his career.[16]

In the nonfiction PBS series Cosmos: A Personal Voyage, Carl Sagan referred to an Encyclopedia Galactica in the episodes “Encyclopaedia Galactica” and “Who Speaks for Earth”.

Before I go any further, let me first say there are many organizations that are attempting to fill the gap that is ever increasing.  The Syrian Refugee Crisis is has been and is here to stay (Imagine It’s The Year 2045, Will the Syrian Refugee Crisis Be Resolved? is a great article on this topic). Men and women have been researching history, collecting data and seeing a steady decline in our world as we know it.  It has been the topic of many Hollywood movies.

In my lifetime alone earthquakes continue to devastate countries and are increasing in frequency, intensity and devastation.  Over 40 years ago, two days before Christmas, at 12:29 local time, Saturday, December 1972, a 6.2 earthquake hit Managua, Nicaragua.  The earthquake caused widespread casualties among Managua’s residents: 6,000 were killed, 20,000 were injured and over 250,000 were left homeless.  I’ve been to Nicaragua this past year, and the people are still recovering.  It was interesting to see the “trees of life” that have been erected there.  My recent visit to Nicaragua, shows me that recovery for this country will be doubtful, in my lifetime. 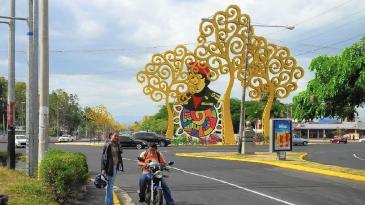 Her Trees of Life, many Nicaraguans say, are like symbolic billboards promoting her position and mystic allegiance. They cost $20,000 apiece and run up $10,000 monthly in electrical bills, the independent news organization Confidential reported.

The trees are said to be patterned after a biblical reference: “And out of the ground the Lord God made to spring up every tree that is pleasant to the sight and good for food. The tree of life was in the midst of the garden …” (Genesis 2:9). Read More about Nicaragua’s first lady…

God speaks a lot about foundations and how we are to become like great oaks and trees of righteousness for His glory.

To all who mourn in Israel, he will give a crown of beauty for ashes, a joyous blessing instead of mourning, festive praise instead of despair. In their righteousness, they will be like great oaks that the LORD has planted for his own glory. Isaiah 61:3

At Globe Hope there are four women who are making a difference.  They are great oaks the LORD has planted for such a time as this.  They need help!  They need sponsors who will pray and write to their children, be role models as interns, visit and help their ministries through prayer and financial support.  To learn more about Globe Hope’s organizations, I have provided links below:

Challenge Farm, Kitale Kenya – Home to over 200 children rescued from the streets.

Children of Destiny, Nicaragua – Two homes, one in the mountains of Jinotega for older children and an infant home in Los Cedros, near the coast.

Residence of Life, Costa Rica – home for children who are basically are not adoptable.

In closing, I would like to say we can not be fearful or give up the hope for our future both now and hereafter.  I am reminded that Galatians 6:9 says,

Let us not lose heart in doing good, for in due time we will reap if we do not grow weary.

Jesus told his disciples many anti-Christs were already on the earth.  This is true.  We must not give up the race, as it is almost over for believers… one way or the other.  There is another millennium where Christ and those that will be with Him, will reign and an eternity that will never end.

Cinderella Released from ashes to beauty