A Spirit of Fear

Individual reactions to fear vary situation to situation.  Some people may freeze like a statue, become pale and breathless, while others panic, scream, and their heart beats violently.  While fear could be merely an individual reaction to a scary situation, it might be something greater, more ominous, and powerful than mere reaction.  Perhaps fear is an entity or supernatural spirit which looks for opportunities to steal a person’s courage and instinct for survival.

Fear can paralyze, cripple, and overpower a person if it is allowed to take charge. Overcoming fear has always been a factor when people are faced with stressful or life threatening situations. Eleanor Roosevelt once said, “You gain strength, courage and confidence by every experience in which you really stop to look fear in the face.  You must do the thing which you think you cannot do.”

Described below are three separate examples to illustrate the responses of those faced with fearful and overwhelming circumstances:

In the first example, Pastor, Bobette Stubblefield, talks about fear:

I grew up in Alaska where danger and courage went hand in hand.  If you love the outdoors like I do, you develop a natural ability to live life on the edge and face death daily… I had a bold and courageous spirit and I feared nothing.  Fear cripples and can make someone very ill, both physically and spiritually.  Fear tried to cripple me (Stubblefield. March 20, 2004).

Bobette, crowned Miss Alaska Teenager, was a very outgoing, public-minded, individual, prior to her marriage, which occurred just a few years later.  Her husband, became abusive both verbally and physically. He used fear to rob Bobette of her adventurous and outgoing spirit.  Bobette points out in her interview how fear overcame her:

Soon after our marriage began, my husband began to isolate me by forbidding me to spend time at church and with my family and friends. Isolation then begins to break down a person’s worth; and little by little steals their identity.  My husband would shove me down and overpower me physically.  …He would then urinate on me.  Fear became my captor (Stubblefield. March 20, 2004).

She also described how she would shake uncontrollably whenever she would think about going home or would drive toward her house. She stayed in the marriage for 12 years and faced fear daily.  Finally, one day, when she had to defend herself in a court battle over her children, she was forced to face fear head on.  Fearful, but determined to overcome it, she took courageous steps toward the courtroom door.  Just before entering the courtroom, she realized she was not alone and that God had stationed angels around her.  Bobette recalls that day:

But, before I walked in front of the judge, God opened my eyes like He opened the prophet Elijah servant’s eyes.  Elijah’s servant saw thousands of angels standing ready for battle on he and his country’s behalf.  When God allowed me to see into the spiritual realm, He showed me six angels dressed like Secret Service men.  They were with me walking arm in arm into the courtroom. I realized I was not alone anymore. The Bible says, “God has not given us a spirit of fear; but of power, and love, and a sound mind.”

When asked what revelation she had gleaned from the experience, she replied, “I’m not a victim. I’m an over comer. You can’t be fearful and overcome.  If you will put your trust in God, given the opportunity, He will deliver you” (Stubblefield. March 20, 2004).

A second example of a reaction to fear is found in Jack London’s account of the 1906 San Francisco earthquake where many individuals facing life threatening circumstances overcame a spirit of fear.  In this account it is recorded where thousands were left homeless and hundreds of millions of dollars worth of damage occurred and yet, fear’s spirit appeared absent from the scene. London says,

Remarkable as it may seem, Wednesday night, while the whole city crashed and    roared into ruin, was a quiet night.  There were no crowds.  There was no    shouting and yelling. There was no hysteria, no disorder.  …I saw not one woman    who wept, not one man who was excited, not one person who was in the slightest degree panic-stricken (396).

As the fire spread, the firemen, police, and others watching the buildings withdrew, and there was a sense of peace over the city. “Her people were kind and courteous on this night of terror” (396).  A spirit of fear never overcame the hundreds of thousands of individuals in San Francisco who had just lost their homes, and in some cases their loved ones; even the U.S. Cavalrymen who were assigned to stand watch remained calm and collected as the city burned.  Even in the case where thousands of trunks and possessions were abandoned after hours of trying to drag them out of reach of the flames people did not show fear.  In one case London writes: “It was Union Square that I saw a man offering a thousand dollars for a team of horses.  He was in charge of a truck piled high with trunks for some hotel”(398).  Another man is noticed as, …cool, cheerful and hospitable. “Yesterday morning“, he said, “I was worth six hundred thousand dollars.  This morning this house is all I have left.  It will go in fifteen minutes” (398).  This man had obviously overcome a spirit of fear.   In this catastrophe, fear was overcome by the majority of the population. This is remarkable.  Many who were once rich men became paupers fifteen minutes later.   Faced with fear and tremendous odds against it, the city rose to the challenge and began rebuilding.  In the closing of his story he writes:

“The Government has the situation in hand, and, thanks to the immediate relief given by the whole United States, there is not the slightest possibility of a famine.  The bankers and businessmen have already set about making preparations to rebuild San Francisco” (400). Fear had left the city and a spirit of unity and restoration remained.

A third case of fear occurred at approximately 11:40 p.m. on Thursday, April 11, 1912, when the internationally acclaimed “unsinkable ship,” the Titanic was attacked by a spirit of fear.  Its hull was ripped open by a gigantic iceberg and hundreds of thousands of gallons of seawater spilled inside her within minutes.  In Hanson Baldwin’s account he writes:

Seaman: “What has happened?“

Captain Smith: “We have struck ice.”

Seaman: “Do you think she is seriously damaged?“

Fear had hit the mark.  It was a quiet and silent night.  At first, as the passengers were awakened and news of the ship’s collision spread, it seemed as if no one really realized the danger and the cloak of fear, which had surrounded and paralyzed the crew and ship.

Partially filled lifeboats were launched with women and children.  After what seemed like hours and after the brutal realization of the ship’s demise, the Captain surrenders the fight. Baldwin describes the resignation:

The Captain’s tired white face appears at the radio-room door.  “Men, you have done your full duty.  You can do no more.  Now, it is every man for himself.”  The Captain disappears — back to his sinking bridge, where Painter, his personal  steward, stands quietly waiting for orders (407).

Then almost three hours later the band on board switches from ragtime music to a hymn, “Nearer My God to Thee.” Panic set in, some were kneeling, praying, while others were jumping overboard.  With sadness Baldwin writes about the defeated Titanic:

2:20 A.M. The greatest ship in the world has sunk.  From the calm, dark waters where the floating lifeboats move, there goes up, in the white wake of her passing, “one long continuous moan.”  Baldwin continues: …The boats that the Titanic had launched pulled safely away from the slight suction of the sinking ship, pulled away from the screams that came from the lips of the freezing men and women in the water.  The boats were poorly manned and badly equipped, and they had been unevenly loaded.  Some carried so few seamen that women bent to the oars (408).

Many esteemed women took to the oars of the lifeboats.   Baldwin illustrates: “In one of the lifeboats an Italian with a broken wrist — disguised in a woman’s shawl and hat — huddled on the floor boards, ashamed now that fear had left him” (408).

Could it be the fear and isolation overwhelmed and paralyzed the people of the Titanic versus the calm and orderly evacuation in the earthquake?  In San Francisco there were firemen and police that were on watch throughout the evacuation.  The passengers aboard the Titanic however, definitely caught off guard, succumbed to fear and mayhem.

After examining the cases above it seems in two of them the individuals involved were able to face fear and overcome.  In the third case of the Titanic, the individuals lost the battle with fear and were overcome with great loss of strength, courage and life.

Facing fear will always be a challenge, but not yielding to its paralyzing blow seems the best defense.  Especially during times of extreme peril, it is best to fight the spirit of fear, even at the expense of losing terribly.  As Eleanor Roosevelt suggested, facing and overcoming a spirit of fear will not only build courage and strength, but confidence as well.  Once fear is conquered, the victor will look back and see how he/she was able to overcome things he/she thought were impossible. 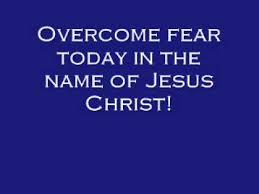