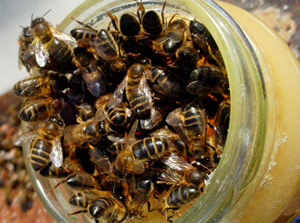 I was reading in Judges about Gideon and how the Israelites had been taken over by their enemies.They had turned away from God and were following after false gods. God removed His protection and allowed their land to be taken over by the Midianites. This tribe came in stripped their land bare, took the cattle, belongings, everything. The Midianites were descendents of Abraham and Keturah, Abraham’s second wife.

While I was reading, I felt a strong urge to look up an article about GMO seeds. If you aren’t aware of what is happening to our wheat and corn crops, you might want to take a look sometime.

I quickly discovered not only is wheat, corn and other crops being dramatically affected but other things such as bees are also. They are dying and many are worried about the affects GMO seeds are really going to have on our nation’s food supply.. It seems the seeds are now destroying the bees which pollinate the crops. Switching back to regular seeds also has become an issue because you can’t seem to get “real seeds” anymore.

This reminded me of another scripture in Exodus about how God used bees or hornets to drive out the enemy when the people were faithful.
Exodus 23:28,

And I will send hornets before you, which shall drive out the Hivites, the Canaanites, and the Hittites from before you.

The story about the Israelites and the Mididianites goes on to say they had reduced Israel to starvation and “then the people called upon the Lord.”

I don’t know about you, but I seem to have a habit of waiting till I’m almost dead before crying out!

The Word of the Lord came to me, Don’t wait until you are almost destroyed to call on God first in every situation.

After the people cried out, the Lord began to search for someone (a leader) who would bring the people out of bondage. He spied Gideon – a man of honor and valor.

Gideon came out and sat under the oak tree where the angel of the Lord came to talk with him, he had been threshing wheat down in a wine press.

I’ve heard some preachers describe Gideon as this frail coward of a man. How I see it, all the crops, cattle and possessions had been looted by the Midianites and Gideon somehow found a way to find wheat, get it down into a wine press, and thresh it there. There was no wind to easily carry the chaff away. This couldn’t have been an easy process.

Gideon wasn’t sitting down or complaining. He was doing something to feed his family. Gideon also makes certain who he is talking to was really from God. (Like Gideon, we need to make certain we are hearing from God before we make decisions.) Gideon had brought food out to the messenger (angel of God) and placed it on a rock, it was consumed by fire. Gideon built and altar there and named it

THE LORD IS PEACE

Whatever you are going through, turn first to the Lord, Place your heart, soul and will on the rock of Jesus Christ and He will be THE LORD OF PEACE in your circumstances.

The Lord says to Gideon in verse 18,”I will be with you. And you will destroy the Midianites as if you were fighting against one man.”

Gideon was still going to have to go to battle with the Midianites but God was with him.

Our nation, individual lives are under attack by the enemy, we must fight for our beliefs, our country, our families, but through Christ we can be victorious!